Scaramouche, Scaramouche will you do the Fandango… 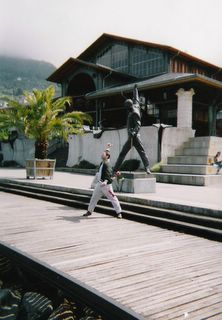 A slightly overdue appearance for friend Mr Tim F this evening, but what a great debut it is, as “Tonight everyone Tim F is going to be none other than Freddie Mercury!”

Yes the flamboyant singer of the rock group Queen, who sadly passed away in 1991. This is the second rock star immortalised in statue form that we have featured on the site. Looking at what Wikipedia has to say on Freddie, he was born in Zanzibar, educated in India, and then lived in England, so, naturally, it seems only sensible to erect a fine statue of the man in Montreux, Switzerland (just outside the train station I do believe)!

Now I could provide you all with a few choice words on the entertainment legend that was Freddie Mercury right now, but Tim undertook the task for me by writing down the words that appeared on Freddie’s plaque by the statue, which I have copied below. Now that is statue research of the highest order. We will, we will rock you.

Born Farrokh Bulsara on the East African island of Zanzibar, Freddie Mecury became one of the world’s greatest rock music performers. His career as lead singer of the band Queen spanned twenty years and together they sold 150 million alnums worldwide. Innovator, showman & musician extraordinaire, he left a compelling legacy and had an enormous influence on the next generation of rock performers.

Queen acquired the lakeside Mountain Recording studios in 1978 and Freddie’s strong links with the town continued until his death. He appreciated the kindness and admiration of the townspeople and Montreux became a haven for him, his second home and the setting for his final work.


Aaah so there was a link to Freddie in Switzerland. A great statue and a fine rock god imitation by Mr F...
Posted by Statue John at 8:51 PM
Email ThisBlogThis!Share to TwitterShare to FacebookShare to Pinterest
Labels: Switzerland