Stand By Your Statue Of Liberty... 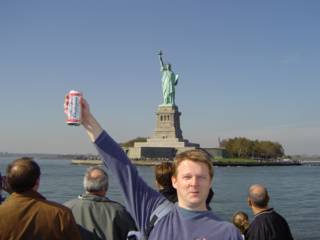 I feel at this early stage that it is important to introduce you to a fellow willing imitator and key statue brother, Mr John van de Poll, my housemate and fellow eager traveller for the last seven years or so...

Many posts over the coming months will feature photos of John, more often than not armed with props! As in this shot.

In this meticulous re-enactment, John provides a 21st century twist, whereby the torch he carries represents one of the most universal symbols of weak and fizzy beer.
Posted by Statue John at 7:14 PM
Email ThisBlogThis!Share to TwitterShare to FacebookShare to Pinterest
Labels: United States

I still think the French should have taken it back when the US invaded Iraq.

That said - it's a lovely example of your art.