King of the Jungle...

Tonight I am going to take just a slight detour from our travels around Spain in the name of a wildlife adventure. 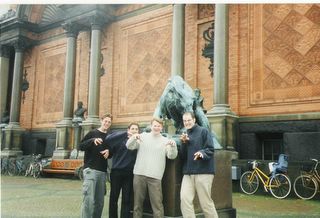 One of the first photos taken in the name of the Stand by Your Statue pursuit was this one, outside a statue of a lion at the Christiansborg Palace in Copenhagen, Denmark.

Take note of four relatively grown up men (my housemate John, Mik Hill, Tim Freeman and SwissToni) stood in front of the statue giving it some growling action. Grrrrr!

Although not a true like for like imitation (as this would involve getting down on all fours and growling), this was the first of many snapshots taken in front of the king of the jungle. 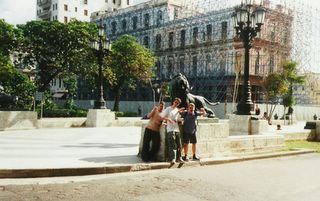 This Stand By Your Lion picture was taken in Havana in Cuba, with just the three grown up men this time: housemate John and Mik happily resuming their growling pose from Copenhagen, alongside friend Justin.

It really is a most therapeutic process, and one which can be simplified in three main steps: 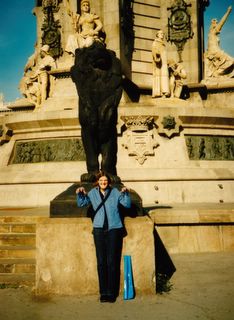 I did say that we were taking just a slight detour tonight, as we now travel back to Spain, and to the beautiful city of Barcelona, where it is time for a grown up woman to practice the Stand By Your Lion boogie. Here my friend Helen Stanley perfects that lion growl, looking incredibly ferocious in the process. Grrrrr!
Posted by Statue John at 7:51 PM
Email ThisBlogThis!Share to TwitterShare to FacebookShare to Pinterest
Labels: Denmark

Great website--I've been taking similar pictures myself for years. I'll have to scan some and send them to you....

Fabulous blog! *rofl!!!*
I have no photos of myself standing by statues, alas, but I did refer to myself as the Winged Victory in a recent post about haunting.
Cheers!

you see, for me, the key to pulling of a successful "tiger" ("You're a tiger! What noise do Tigers make?") is to be committed. Frankly, from the photos below, some are more committed to their "tiger" than others....

I'm with Toni - you only have to look at the first picture, where the man himself is giving it some serious ferocity, as is VDP. Tim F looks like he's trying to hide behind John, and Mik looks like he's watched one too many Ali-G videos and is bustin' a move for the Copenhagen massif.

Mind you, Toni was always going to be the tiger expert.

Your blog is so cool, I love your idea!

Once, I made the mistake of climbing on the bronze lion's back at the Baltimore Zoo when it was 102F outside. OUCH!!!

All I can say is "grrrar!" And thanks for the posing tips. Last time I came across a lion statue I did it all wrong, having a friend take a picture of me riding the lion, not growling like a lion. Silly me. :)